Where is my assistant?

Seriously, where has that twit run off to? Doesn't she know I've got a stack of papers to grade, lectures to prepare, a wedding shower to cobble together, an apartment to straighten up and man, I could really use a pedicure!

The quarter is going quite splendidly, to be honest. My students seem to be rather pleasant, bright, and self-sufficient. For those of you who don't spend time with the college population, this is nothing short of miraculous! This weekend's requisite busy-ness is just making me cranky. I've already graded exams for one class... delaying the article summaries that need to be graded for the other one. If only I could trick someone else into grading them!

I have to be the absolute worst matron of honor in the history of the world. E's shower is less than 2 months away now, and I don't have a venue for it. Oh, there was a venue chosen and about to be scheduled... with a chocolate fountain and all... but the MoB (that would be the Mother of the Bride, who is my own mother as well, but is being foisted upon others for the time-being until I get over being annoyed with her) didn't like the location. Why, oh why, did I capitulate? All of this nonsense could have been done and taken care of months ago. But no, the whining won and the original locale was scrapped. And now I'm desperately looking for a place to host a fancy shower for my darling sister who deserves the world - not my crap-ass attempts at planning a party from 3000 miles away. Seriously... if anyone out there is just dying to help plan a bridal shower in the Lake George, NY area, do let me know!

In other news, H got a new tattoo last weekend. 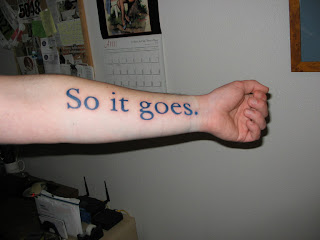 For those not familiar, it's a line from Slaughterhouse Five by Kurt Vonnegut. Mr. Vonnegut passed away on Wednesday, apparently satisfied that someone had tattooed his words into their flesh. RIP K.V.!

You may have noticed that for a blog supposedly about being crafty with fiber-stuffs, I haven't been very prolific in that department. Yes, that's another thing that brings me shame and sadness. I just haven't been very inspired to knit or spin lately. I'm working on a pair of socks, and have been spinning a bit... but I just haven't had the heart for it lately. Hopefully this ennui will be on its way out soon.

I did finish a necklace: 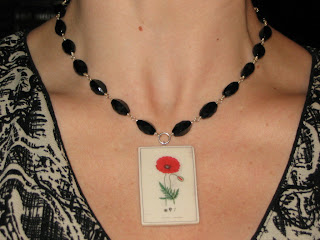 The pendant is from gNeebo on etsy.com. (She has great pendants!)

if you are serious contact me
www.adirondackhelpinghands.com
we can help you out

No no contact ME I have so much free time lately and I'm extremely qualified to plan a bridal shower. (Not everyone knows this but I'm actually related to a number of former brides, and I shower almost daily)

Seriously, when will you be out here? I know that an extra get-together wouldn't exactly make your visit more relaxing... but in theory hanging out with babies is fun.

Would you look at that? Everyone wants to help plan a shower.

Anonymous - thank you. I've bookmarked your site... I'm so glad to know about it.

Hey Shawn! You've been on my mind lately. I need to email you. Your daughter is the cutest pie!

Annigan
By day: neuroscientist & professor, by night: craftisan of assorted wonders and goodies. Also known to do a bit of wifery, enjoying of fine comestibles, and staring-at of dogs.

my wists | clone this

I heart these blogs!

Links for your amusement & edification